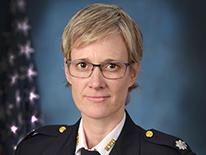 In 2018, Michelle Ridlehoover was promoted to Inspector and assigned to the Joint Strategic & Tactical Analysis Command Center, which is responsible for sending out crime alerts, coordinating with the Washington Regional Threat Analysis Center and United States Capitol Police, and providing research and analytical services to support innovative policing operations and public safety practices.

Prior to her promotion to Inspector, Michelle served as a captain in the Second District.

She has an extensive background in community engagement and supervision and has received numerous certifications and trainings, such as the Prevention and Deterrence of Terrorist Acts, Incident Response to Terrorist Bombings and Prevention and Response to Suicide Bombings.

Inspector Ridlehoover joined MPD in 2004 where she was assigned to the First District as a Patrol Officer.

Her supervisory experience at MPD began at the Seventh District where she served as a Sergeant for over four years. Following a promotion to Lieutenant in October 2014, Michelle served the community of the Fourth District until her transfer back to the First District. She was promoted to Captain in January 2017 and was assigned to the Sixth District for one year before her transfer to the Second District.

Inspector Ridlehoover graduated from Humboldt State University in 2001 with a Bachelor’s Degree in Interdisciplinary Studies.