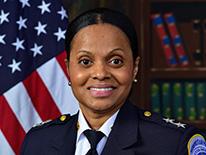 Prior to leading the YFEB, Chanel Dickerson served as the Assistant Chief of Patrol Services South (PSS) which includes the First, Sixth, and Seventh police districts.

Dickerson began her career with MPD as a cadet in 1988 and rose through the ranks. Since 2004, Assistant Chief Dickerson has served in multiple supervisory roles. She has served as the detective sergeant, lieutenant, and for a significant portion of her career, captain of MPD’s Criminal Investigations Division. Her analytical and investigative leadership skills have contributed to high closure rates within the sexual assault, financial crimes, and bank robbery units. She has also managed the Domestic Violence Unit, focusing on victim services, community outreach and education. During her tenure as the Commander of the Youth and Family Services Division, she oversaw the daily operations and investigations involving child abuse and neglect, child sexual abuse and exploitation, juvenile and adult missing person cases, absconded youth, and internet crimes against children.

Assistant Chief Dickerson’s hard work, steadfastness and significant contributions to DC and MPD has gained her national recognition and multiple awards, including the National Center for Missing and Exploited Children’s Heroes Special Recognition award. In 2018, she was the proud recipient of the 17th Annual Cafritz Award, which honors distinguished DC Government Employees for their outstanding performance and exemplary service. Assistant Chief Dickerson also received the 2019 Community Service award from the National Organization of Black Law Enforcement Executives (N.O.B.L.E.); she is also an active member of this prestigious organization.

Assistant Chief Dickerson has been recognized by MPD for her exceptional community service and expertise in juvenile justice relations, along with a host of many other major career accomplishments. She is highly sought after for her expertise in human trafficking; serving as a panelist in the “Women In Leadership” conference hosted by N.O.B.L.E in May 2017 and presenting at the 125th International Association of Chiefs of Police (IACP) Annual Conference and Exposition in 2018.

Assistant Chief Dickerson is an alumnus of the George Washington University, possessing a Bachelor’s degree in Police Science, and a Master’s degree in Homeland Security.