Bonus to Phone Us: Off Road 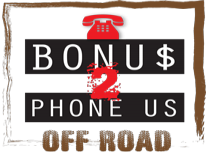 It's against the law to ride dirt bikes and ATVs on DC’s streets.

All-Terrain Vehicles and Dirt Bikes don’t belong on city streets.  Minibikes, dirt bikes, all-terrain vehicles, and other motorized bikes and multi-wheeled vehicles pose a danger to pedestrians and other motorists and are illegal to operate on DC’s streets. If you see — or know the identity of — someone riding a dirt bike or ATV recklessly on DC streets, call or text the police. Help us keep our city safe. You could be eligible for a reward of $250 for your information. Call (202) 727-9099 or text 50411 with your information.

What is an ATV?

An all-terrain vehicle (ATV) also known as a quad, quad bike, three-wheeler or four-wheeler is defined by the American National Standards Institute (ANSI) as a vehicle that travels on low-pressure tires with a seat that is straddled by the operator along with handlebars for steering control. As the name implies, it is designed to handle a wider variety of terrain than most other vehicles. Although it is a street-legal vehicle in some countries, operation of these vehicles is not legal in the District of Columbia.

What is a Dirt Bike?

A dirt bike is an off-road motorcycle that is built to be lightweight, powerful, fast, and nimble. Several variations of the dirt bike exist for different purposes, from racing to touring and beyond, and the size and function of the dirt bike depends not only on the type of riding being done, but also the person riding the particular dirt bike. Just about all dirt bikes feature knobby or semi-knobby tires, which have a tread aggressive enough to handle varied terrain — from mud to rocks, from smooth dirt roads to inclining and declining trails.

How are ATVs and Dirt bikes being used in the District of Columbia?

Riders of ATVs and dirt bikes are openly breaking the law on DC streets. These riders do all kinds of tricks such as wheelies and riding on the sidewalks. ATVs and dirt bikes are illegal to ride on public streets in the District of Columbia, but MPD’s chase policy prohibits officers from pursuing the vehicles. In fact, those familiar with the problem say that some riders come from other areas on stolen dirt bikes and ATVs because DC is known for its no chase policy.

What Dangers Do ATVs and Dirt Bikes Pose?

A 25-year-old DC woman was with her 23-year-old cousin and a group of others as they crossed Alabama Avenue, SE, around 8 pm. The pedestrians had the right of way. A moment later, two dirt bikes came speeding toward the group. At least one of them popped a wheelie. The woman soon realized her younger cousin had never made it to the curb along with the rest of the group. The rider of the dirt bike popped a wheelie and caught the younger cousin’s shirt in the handlebars of the bike. The impact threw the young woman into the path of an oncoming vehicle, partially pinning her under the tires. The woman suffered extensive injuries.

How You Can Help: Bonu$ 2 Phone Us: Off Road

“Bonu$ to Phone Us: Off Road” is a program that offers DC residents the ability to call (202) 727-9099 when they know the location of an ATV or dirt bike  being operated illegally on public space in Washington, DC. If the information results in the confiscation of the dirt bike or ATV AND the identification of its driver/operator, the caller will be authorized to receive a $250 reward.

Let’s say you see an ATV or dirt bike being operated illegally in the District of Columbia. You call the MPD’s Command Information Center at (202) 727-9099 to report the incident and provide a description of the vehicle, its operator, and the location where it is being driven. Police respond, stop the operator, and confiscate the vehicle.

If your tip leads to a successful removal of an illegally-operated ATV or dirt bike and the identification of its rider, the CIC will provide you a Tip Tracking Number which you can use to follow up in a few days. Upon follow-up, the CIC staff will provide you with further instructions for collecting your reward.

If the tip leads to a successful confiscation and identification of the driver/operator of the vehicle, you will be eligible for the $250 reward. The reward and payment collection instructions will be provided to you by the CIC staff.

Tips that do not lead to a successful confiscation and identification of the rider will not be eligible for payment.

Brochure describing the Bonus to Phone Us: Off Road program