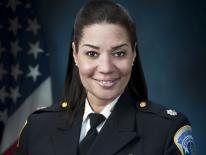 Inspector Vendette Parker began her law enforcement career at the young age of 17 and worked her way through the ranks from Police Cadet to Inspector.  In her 21 year career, she has been assigned to all seven Districts in various capacities as well as the Criminal Investigations Division.

Inspector Parker first served as a Police Cadet in the Fourth District.  She later became an officer where she was assigned to the Fifth District and later the Sixth District.  In 1999, Inspector Parker was detailed to the Sixth District Detectives Office where she investigated Hit and Run Accidents and Domestic Violence Crimes.  In 2004, she was transferred to the Homicide Branch, where she worked with the Family Liaison Unit providing advocacy and support services to survivors of homicide victims.

Inspector Parker was promoted to Sergeant in 2005 and was assigned to the Second District.  In 2006, she returned to the Criminal Investigations Division, serving as a Detective Sergeant in the Fifth District Detectives Unit supervised serious assaults.  There she oversaw investigations involving shootings for which her team was able to secure numerous indictments and convictions.

In 2008, Inspector Parker returned to the Homicide Branch as the Natural Death Unit Commander, investigating all natural deaths occurring within the District of Columbia.  She was promoted to the rank of Lieutenant in 2009 and was assigned to the First District.  As a Police Service Area Lieutenant, Inspector Parker received the crime reduction award twice in the year 2010.

In 2011, Inspector Parker then again returned to the Criminal Investigations Division where she served as a Detective Lieutenant and Unit Commander of the Third District Detectives Unit.  In this capacity, Inspector Parker was met with the challenge of a record high number of robberies – mostly involving cellphones.  Her team was able to identify the main offenders, fencing rings, and black market retailers.  Through collaboration with her patrol partners, she was able to thwart many of these organized operations which sharply reduced the number of robberies occurring in that district.

In 2012, Inspector Parker was assigned as Unit Commander of the Sexual Assault Unit and Sex Offender Registry Unit.  Inspector Parker participated in restructuring how MPD interacts with victims of these sensitive crimes and the process by which investigations are conducted, fostering trust between the community and MPD.  She also provided Sexual Assault response training to multiple local law enforcement and government agencies as well as community organizations.  As a result of her efforts, Inspector Parker received the Lieutenant of the Year award for 2013.

In 2014, Inspector Parker was promoted to the rank of Captain and assigned to the Seventh District.  There she served as the command official for the Barry Farm/Washington View Summer Crime Initiative Area.  In the three  months of this initiative, her efforts resulted in an 11 percent  reduction in violent crime and a 31 percent reduction in property crime for a 26% overall reduction in total crime.  She was later transferred to the Executive Office of the Chief of Police where she served as interim Chief of Staff to the Chief of Police.

Inspector Parker is a Certified Public Manager through the George Washington University with a Green Belt in Six Sigma.  She holds a Bachelor’s Degree in Organizational Leadership from Johns Hopkins University.

Inspector Parker is a native Washingtonian. She was raised and received her primary education in Wards 4 and 6, attending Whittier Elementary, Jefferson Junior High, and Coolidge Senior High.