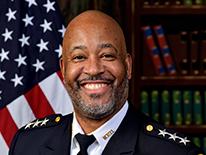 Patrol Chief Lamar Greene is currently serving as the Patrol Chief of Patrol Services North (PSN), which includes the Second, Third, Fourth and Fifth Police Districts. Patrol Chief Greene offers more than two decades of law enforcement experience and expertise. He started his career as an officer in the Fifth District, a patrol sergeant in the Third District, and was then promoted to patrol lieutenant in the Fifth District. He served as the Executive Protection Unit Commanding Official from August 2005 to February 2006, where he provided protection for the Mayor of the District of Columbia and his family. He was appointed as an Inspector assigned to the First District, and in 2007 he was appointed Commander of the Fifth District Police Station, where he successfully led the city in reducing crime by ten percent in 2008. He was awarded the Commander of the Year and Best Performing District Awards in 2009. Patrol Chief Greene also held a number of investigation roles, including lieutenant in the Violent Crimes Branch/Homicide Unit, as well as managing district-level investigations at the Third District detective’s office.

Before being named Patrol Chief, Lamar Greene served as the Assistant Chief of Police for the Metropolitan Police Department (MPD) managing the Homeland Security Bureau (HSB), one of five Executive Command Staff positions that are responsible for the implementation of goals and objectives set by the Chief of Police and Mayor of the District of Columbia. As head of HSB, Assistant Chief Greene oversaw all intelligence and operational functions to ensure that the District of Columbia is well-protected, and that the government prevents and prepares to respond to threats and critical incidents. This included planning and implementing overall preparedness and readiness operations for MPD as it relates to response, mitigation, and recovery from catastrophic incidents such as terrorist attacks and natural disasters.

As Assistant Chief of HSB, he also oversaw the MPD Joint Terrorism Task Force (JTTF) and their daily activities, as they pertain to Washington, DC. This involves threat detection and mitigation on various levels of counterterrorism, while also promoting preparedness initiatives to our residents and business communities. Additionally, he managed the citywide traffic enforcement and education programs. Of particular note was his personal supervision of the development and implementation of the current citywide Impaired Drivers Program, which has been nationally recognized for its enforcement structure. He also had responsibility for all intelligence operations within the agency; specifically, gathering, storage, preparation of intelligence products and dissemination.

Also, during his tenure as Assistant Chief of HSB, he served in a critical command role pursuant to the active shooter incident that occurred at the Washington Navy Yard in 2013. He held various roles during the comprehensive review and development of the after-action report, which resulted in the establishment of over 30 new policies relative to the findings. He also served as the incident commander for many high profile demonstrations in the District of Columbia such as the IMF/World Bank demonstrations, the Million Man March, and the annual Right to Life demonstrations. He directed the planning of the 2013 and the 2017 Presidential Inaugurations, for which there were over one million attendees and more than 4,500 law enforcement personnel detailed to serve in various capacities.

Patrol Chief Greene has received a list of awards such as, the Life Saving Medal, the Sustained Superior Performance Award; the Homeland Security Emergency Management Agency (HSEMA) Special Service Medal (for sustained and noteworthy achievement in support of the mission of HSEMA); the U.S. Army Air Operation Group Certificate of Appreciation for outstanding support during the Safety Stand Down Day; and the Metropolitan Police Department’s very own Commander of the Year; as well as Best Performing District Awards while at the 5th District Police Station.