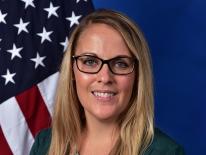 Carolyn Montagna is the Director of the Metropolitan Police Department’s Joint Strategic and Tactical Analysis Command Center (JSTACC). The mission of the JSTACC is to research, correlate, and disseminate timely, accurate, and actionable information from multiple sources to support robust analysis and deploy personnel and resources in real-time. Using state of the art technology, the JSTACC provides 24-7 support while using a proactive and data-driven approach to law enforcement. The JSTACC Division is comprised of over 130 sworn and civilian personnel.

During her tenure with MPD, Carolyn has continuously worked to implement new technology and analytical and intelligence techniques to support law enforcement operations and public safety initiatives for the department. She represents MPD on internal and external working groups and task forces established to review and resolve public safety problems. She also oversees communication and facilitates collaboration between local and federal law enforcement agencies during activations of MPD’s Joint Operation Command Center (JOCC) during major planned and unplanned events.

Carolyn joined the Metropolitan Police Department in 2013 as a Criminal Research Specialist assigned to the Investigative Support Section (ISS), which lends real-time investigative support to MPD members in the field. In 2015, she was promoted to Criminal Research Specialist Supervisor, where she implemented many of the techniques and procedures that continue to make the ISS a critical and successful part of MPD real-time operations. In 2017, Carolyn was promoted to Operations Manager for the JSTACC Branch where she oversaw the daily operations for the Command Information Center, the Investigative Support Section, and the Teletype Section. Additionally, she has led the Intelligence Branch and the Research and Analytical Services Branch in past assignments.

to her work with the Metropolitan Police Department, Carolyn was a Supervisor in the Analytical Intelligence Section of the Baltimore Police Department where she provided analytical support the agency for almost four years. She also spent a year as a Cold Case Analyst with the Henry C. Lee Institute of Forensic Science in West Haven, Connecticut.

Carolyn has a Master of Science in Forensic Science with a concentration in Advanced Investigation from University of New Haven in West Haven, Connecticut and a Bachelor of Science in Biomedical Engineering from Worcester Polytechnic Institute in Worcester, Massachusetts.